THE HISTORY OF CAPE CORAL

Cape Coral is located in Southwest Florida directly on the Gulf of Mexico. The city covers an area of almost 300 km² (ca. 115,100 square miles), making it the second largest and fastest growing city in the State of Florida. If the “exhausting” days lounging by the pool of your vacation home become too much, other cities like Fort Myers, Tampa, Naples or even Miami are within reach.

For a quieter vacation with trips to the beach, don’t miss Fort Myers Beach or Sanibel Island. Even shorter is the distance to the Cape Coral beach, which you can reach by bicycle from several vacation homes.

THE DEVELOPMENT OF CAPE CORAL 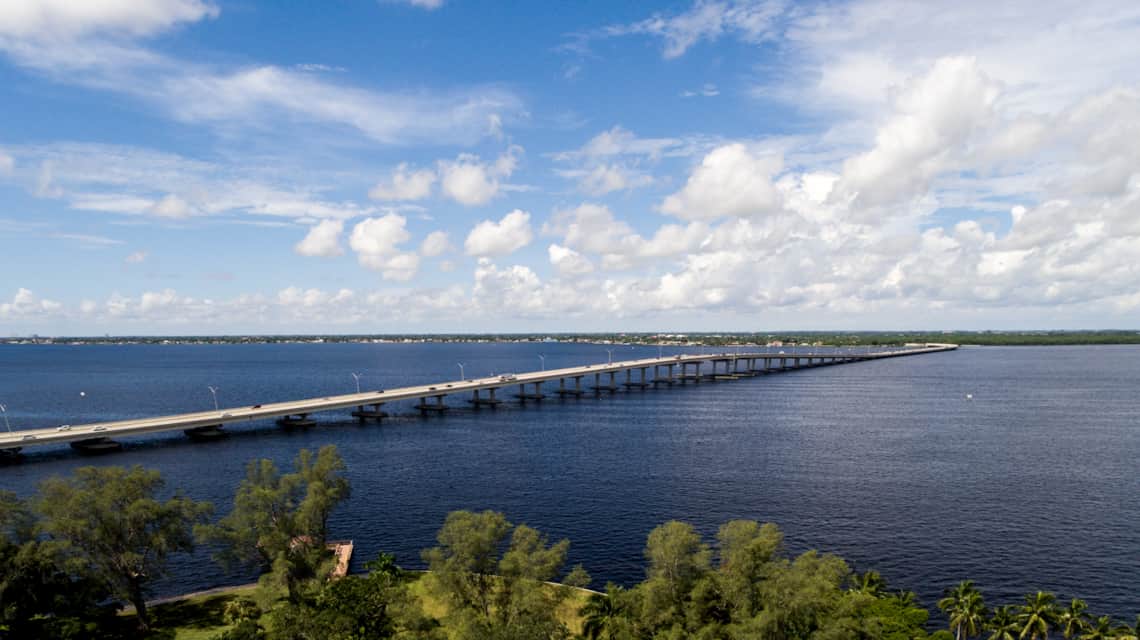 Cape Coral is a young city that was created at the end of the 1950s. The brothers Leonard and Jack Rosen founded the Gulf American Land Corporation in 1957 with the goal to transform the stretch north of the Caloosahatchee River into a “Waterfront Wonderland.” Land previously used mainly for grazing was divided by streets and canals. Cape Coral now offers over 640 km (400 miles) of waterways and canals, some with access to the Gulf of Mexico. Most of the canals are navigable by boat. It is no surprise that many of the vacation homes which can be found in the city today do not just offer a private pool but a private dock as well.

The first few homes were built in 1958. While they are certainly not comparable to the modern pool homes of today, these early properties have a charm of their own and can still be admired in the Yacht Club area, one of the oldest neighborhoods in Cape Coral. An intense advertising campaign was the reason for the city’s rapid growth. Properties in Cape Coral became extremely popular.

In order to connect the city with Fort Myers, the Cape Coral Bridge was built in 1964. A second bridge, the so-called Midpoint Bridge, was added in 1997 to keep up with the immense growth.

In 1970, Cape Coral officially reached city status. Today, there are around 180,000 inhabitants. It is not just the snowbirds escaping the harsh winter up north who appreciate the sunny spot in wintertime. For many Europeans, Cape Coral is a popular destination when they visit the U.S. There are a few hotels, but the majority of guests end up staying in a vacation home with pool (such as you’ll find on our website). They can cycle to the Yacht Club beach by bike or head out to Cabbage Key by boat.

You are probably aware that Florida’s nickname is “The Sunshine State.”

If you rent a vacation home here, you can safely assume that not only is Wi-Fi part of the standard features but also an air conditioning system. On average, Cape Coral enjoys 355 days of sunshine per year (and also 145 days of rain). In the summer, we are mostly talking of short but heavy storms in the afternoon. The temperatures around 35° C (95° F) and the high level of humidity are made bearable by a dip in the pool.

Winter guests can expect mild temperatures around 25° C (77° F) and little rainfall. It is usually the perfect weather for an extensive round of golf or a bike tour down to Cape Harbour, for example.

Loading...
Upps!
You're running a web browser we don't fully support. Please upgrade it for a better experience.
Our site works best with Google Chrome.
How to upgrade the browser